Otto & Astrid are Berlin’s Prince and Princess of art rock and Europop and the two halves of Die Roten Punkte (The Red Dots).

They are super musicians and unparalleled performers of stellar proportions - gigantic and explosive.

Tragically orphaned as children, the brother and sister duo ran away from their small rural hometown and ordinary childhood, to Berlin, and knew instantly they had found a place among the counterculture, a home in a squat - and the solace and saviour of the Rock’N’Roll music.

Die Roten Punkte was soon born, and the best band in the world was bestowed upon the world.

The band experienced a lightening speed rise to stardom - and have been touring ever since, travelling the globe non-stop with their smash hit records*, performing sold out concerts to seas of fans**, performing alongside some of the Rock Music’s biggest names***, all the while maintaining the unrefuted title as the best band in the world.

The raw, electrical power the band brings to their concerts is kinetic. The siblings supreme themselves are like Chalk and Cheese- they clash. But the sparks that fly when this brother & sister take the stage, they set the audience alight.

Vocals, Guitar, Keytar Loops. Otto is a dedicated disciple of Rock 'n' Roll - as well as the Straight Edge lifestyle. He’s a deep thinker, a lyrical wizard and is as loyal to Die Roten Punkte as he is to its fans. 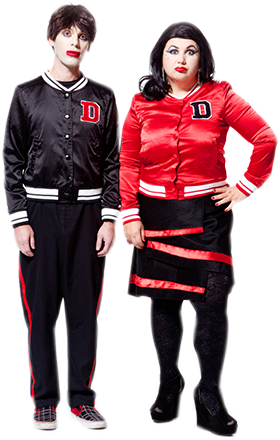 Vocals, Drums, Accordion, Glockenspiel. Astrid she brings the noise - both in song and between them. She has a wit as sharp as her timing & lives her life like she puts her pedal to the metal on the bass drum - hard and fast.

Try to keep up with her via her Facebook page here.

These two musical powers combined is a force to be reckoned with - and one you undeniably want to ROCK with.

We'd love you to spend a little longer to learn about some special people and organisations we love and work with, that help Otto & Astrid be optimally astronomical.